On Tuesday it was my last day in Berlin since we had to travel to our next destination, which it’s Essen. I was not ready to say goodbye to Berlin because I had gotten used to taking the train and trams to places where I could go with my friends like Alexander Plaza or even […] Wow! what a fantastic day it was yesterday. The day began very early we had to take the train by 9 am to go to the botanical garden in Berlin. As a plant lover, I was excited since I have never been to a botanical garden. When the tour started my peers, and I got […] What an exciting day it was yesterday. We went to visit different parts of Potsdam, Germany and it was beautiful, but the best part about the whole day was taking a tour of Sanssouci Palace. Going into the palace was breathtaking; it was gorgeous in the inside. The tour that we did of Sanssouci Palace […] Yesterday with my classmates, we went to Südgelände Park. Südgelände is a park that used to function as a train station to carry cargo in Berlin, but it was closed down in 1952. During the 50 years that it was abandoned, many species started to grow, and so it became a diverse, species-rich natural oasis […]

It is one day until I leave to Germany and the past two weeks I spent time with my friends and family because although I will be back in a month, I will miss them very much. I also was buying the essentials I will need for Germany, so I would not leave anything behind. […] 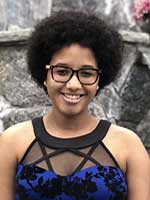 At a young age, I used to live in the Dominican Republic. When I was ten, I moved to Penns Grove, New Jersey and was able to learn English in a year. During my high school years, I was involved in many leading organizations. I was a Peer Leader, Captain of the Lady Red Devils basketball team and Vice President of the National Honor Society. Since a very young age, my goal has been to graduate from college with a Bachelors in Landscape Architecture. Now as a second-year LA student I have become more involved with the Rutgers community by joining clubs like the Landscape Architecture club, becoming Treasurer of the COSINE club and becoming a peer mentor for SEBS EOF. This year I have been given the opportunity to study abroad to Germany with the Landscape Architecture department which I am hoping to immerse myself in the new culture.